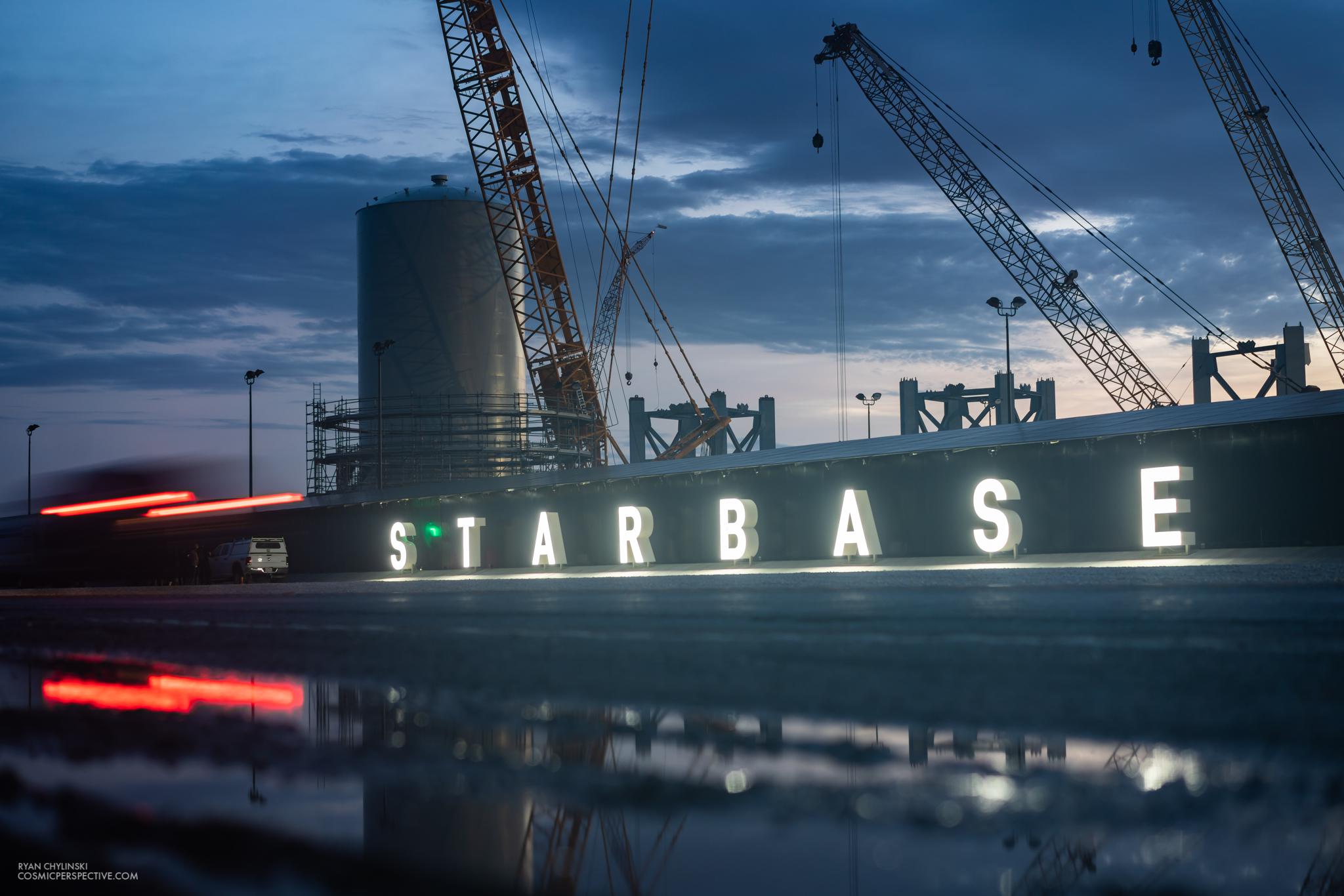 Last week’s progress at SpaceX’s Starship development site culminated with the spectacular, but brief, sight of a fully-stacked launcher towering nearly 400 feet above the tidal flats of South Texas.

The first full stacking of SpaceX’s Starship launch vehicle, doubling as a fit check and photo opportunity, will be followed by more outfitting of the huge rocket ahead of its first orbital test launch. Later Friday, SpaceX detached the Starship upper stage and rolled it back to a nearby high bay for additional work to prep for its trip to space.

Elon Musk, SpaceX’s founder and CEO, tweeted Friday that engineers in South Texas will complete work on the heat shield tiles that cover the stainless steel skin of the rocket’s upper stage, known simply as Starship. SpaceX will also install thermal protection materials around the 29 high-power Raptor engines at the base of the rocket’s first stage, which SpaceX calls the Super Heavy.

Together, the rocket stands 394 feet (120 meters) tall. That’s enough to make the Starship the tallest rocket ever built.

Musk said Friday that SpaceX teams will also complete work on the ground storage tanks that will contain the methane and liquid oxygen propellants to be loaded into the gigantic rocket. Another task will be the mounting of a quick disconnect arm on the launch tower at the orbital launch pad at the Starship development site, which SpaceX calls Starbase.

The quick disconnect arm will feed propellants into the Starship upper stage during the countdown.

The launch tower itself is a recent addition to the Starbase site. SpaceX constructed the structure earlier this summer.

Musk did not mention other work planned ahead of the first Starship orbital launch attempt. SpaceX is expected to perform cryogenic proof testing of the Super Heavy and Starship. SpaceX may also be planning multiple test-firings of their Raptor engines.

Last week’s accomplishments at Starbase, located on the Texas Gulf Coast east of Brownsville, included the first assembly of 29 Raptor engines at the bottom of a Super Heavy booster.

SpaceX mounted six Raptor engines to a Starship upper stage, including three engines designed for operation in Earth’s atmosphere and three with larger nozzles optimized for firing in space.

The 29 methane-fueled Raptor engines on the Super Heavy booster will combine to generate nearly 15 million pounds of thrust at full power, more than any other rocket in history.

Musk tweeted Friday that seeing the first full-scale Starship launch vehicle on its launch pad was a “dream come true.”

SpaceX has not identified a target date for the Starship’s first orbital test launch, but the company wrote in a filing with the Federal Communications Commission in May that it expected the demonstration mission to occur some time between June 20 and Dec. 20.

The orbital test launch will follow a series of ongoing atmospheric flights intended to validate the rocket’s performance at relatively low altitudes.

The five Starship prototypes, each using only the vehicle’s upper stage, launched since December have each used three Raptor engines to power the 16-story test rockets to altitudes of more than 30,000 feet (about 10 kilometers) over South Texas. Four test rockets exploded during or soon after landing, but the most recent Starship prototype — Serial No. 15 — nailed its vertical, propulsive touchdown back at the Starbase facility.

The Starship stage, like the Super Heavy booster and SpaceX’s partially reusable Falcon 9 rocket currently in operation, will use variable thrust from its main engines to slow down for landing.

The Super Heavy and Starship vehicles stacked Friday are designated Booster 4 and Ship 20.

Unlike the Starships flown on the recent atmospheric hops, Ship 20 is covered in thousands of heat-resistant tiles to protect the craft’s stainless steel structure from the scorching heat it will encounter during re-entry into Earth’s atmosphere.

SpaceX is developing the privately-owned Starship vehicle as a fully reusable launch and space transportation system capable of ferrying more than 100 metric tons of cargo into low Earth orbit, more than any other rocket in the world. SpaceX eventually aims to develop an in-space refueling capability to extend Starship’s heavy-duty cargo carrying range into the solar system.

During an orbital launch attempt, a reusable Super Heavy first stage booster will detach from the Starship and come back to Earth for a vertical landing. Eventually, SpaceX wants to use catcher arms on the launch tower to capture the descending first stage, making it easier to configure and refuel for another mission.

The Starship will continue into orbit and deploy its payloads or travel to its deep space destination, and finally return to Earth to be flown again. The Starship vehicle doubles as an upper stage and a refillable transporter to ferry people and cargo through space to destinations in Earth orbit, the moon, Mars, and other distant locations.

The reusable architecture, which builds upon SpaceX’s partially reusable Falcon 9 rocket, is designed to reduce the cost of each flight.

“There is a reason no fully reusable orbital rocket has been built — it’s an insanely hard problem,” Musk tweeted Friday. Moreover, it must be rapidly & completely reusable (like an airplane). This is the only way to make life multiplanetary. Efficiencies of scale is why Starship is so large.”

The Starship’s first orbital test flight, though audacious in scale, will aim to prove out the rocket’s basic launch and re-entry capabilities without fully testing out the complicated landing and recovery systems, according to SpaceX’s filing with the FCC.

After liftoff, the rocket’s Super Heavy booster will fire its cluster of up to 29 Raptor engines for around 2 minute, 49 seconds, on a track toward the east from the Starbase launch site.

About two seconds later, the 228-foot-tall (69.5-meter) Super Heavy booster will jettison to begin a descent to a landing in the Gulf of Mexico around 8 minutes, 15 seconds, after launch. The giant booster will aim to land about 12 miles, (20 kilometers) from shore, according to SpaceX.

Meanwhile, the Starship orbital stage will ignite its Raptor engines at T+plus 2 minutes, 56 seconds, and accelerate into orbit, heading east over the Gulf of Mexico and following a track passing between South Florida and Cuba. Cutoff of the Raptor engines is expected about 8 minutes, 41 seconds, into the mission, SpaceX said, once the rocket achieves the required orbital velocity of around 17,000 mph (more than 27,000 kilometers per hour).

“The Orbital Starship will continue on flying between the Florida Straits. It will achieve orbit until performing a powered, targeted landing approximately 100 kilometers (about 62 miles) off the northwest coast of Kauai in a soft ocean landing,” SpaceX said.

The entire flight — from liftoff in Texas to splashdown near Hawaii — will last around 90 minutes.

One of the first operational uses of the Starship vehicle will be as a lunar landing craft ferrying astronauts to and from the moon’s surface.

In April, NASA awarded SpaceX a $2.9 billion contract to design, build, and test a Starship variant to carry astronauts to the moon’s surface for the first human lunar landing in more than 50 years.

NASA says the first crew moon landing in the agency’s Artemis lunar program could still happen before the end of 2024, a date originally established under the Trump administration.

President Biden has kept the Artemis program largely on track, although NASA officials admit technical or budget delays could thwart prospects for a human lunar landing in 2024.

NASA is in the final stages of assembling its own government-managed heavy-lift rocket called the Space Launch System at the Kennedy Space Center in Florida.

The first version of the SLS, known as Block 1, will stand about 322 feet (98 meters) tall and generate 8.8 million pounds of thrust at liftoff.

NASA says the SLS Block 1 configuration can carry more than 95 metric tons of payload to low Earth orbit, but all of the rocket will be expended. The rocket will be powered by four hydrogen-fed engines and twin solid rocket boosters left over from the space shuttle program, during which the engines and booster segments were reused.

The space agency has spent more than $19 billion on the SLS program since 2011, and the rocket’s first launch has been delayed more than three years.

The first SLS test flight, named Artemis 1 and still officially scheduled late this year, will launch NASA’s Orion crew capsule on an unpiloted test flight around the moon, setting the stage for the Artemis 2 mission in 2023 to send astronauts on a round-trip flyby of the moon.

For the first Artemis lunar lander mission, astronauts will also launch aboard an Orion spacecraft on top of the Space Launch System, then rendezvous near the moon with SpaceX’s Starship landing vessel, which will launch separately — and without a crew — atop a Super Heavy booster.

The crew members will dock with the Starship and ride SpaceX’s 15-story lander to the lunar surface. The Starship will ferry the astronauts back to the Orion capsule for return to Earth.